Delving back into some images from my time in the Canadian Rockies.

The light show on this particular morning was extremely intense. The peaks lit up a and a small rainbow briefly appeared. It was a mad rush to get to this nearby location and find a composition I was pleased with before the show was over!

Just skimming through some older images and this one caught my eye. Shot during Fall 2009.

I actually bumped into well known U.K Landscape Photographer David Noton and his wife Wendy on this particular morning as they were shooting the same snow covered Aspen grove.

Late September I met up with Canadian Landscape Photographer Mike Isaak to shoot some of the fall colours around the banff/kananaskis area. We met up in the evening and decided to base ourselves at the Aspen lined Wedge Pond as the colour was at its peak and we thought it would be a good spot to start the morning shoot. Although the wind was howling down the valley we thought we would stick with this location and see how conditions were in the morning.

After a great nights sleep in the back of my rental van (my van was written off. Story to come) I awoke Mike from his slumber in the boot of his car. It was about 40 minutes before sunrise and the wind was still blowing a gail. The windy conditions were not desirable for this particular location so with decided to come up with a plan b. We could see that the clouds in the east were starting to become under lit  with pink hues so we quickly headed for another location I had in mind.  After a 20min drive down the valley we came to Spillway Lake. The Lake was protected from the wind and the sky was continuing to light up behind the Opal Range. With everything coming together we decided to set up and watch things unfold.

Also I have finally got around to creating a Facebook Page so please “follow me on facebook”.  The page will be regularly updated with discussion, competitions, new images, new blog posts, my whereabouts and other events. Also if any of you have your own page I will be sure to join. Thanks 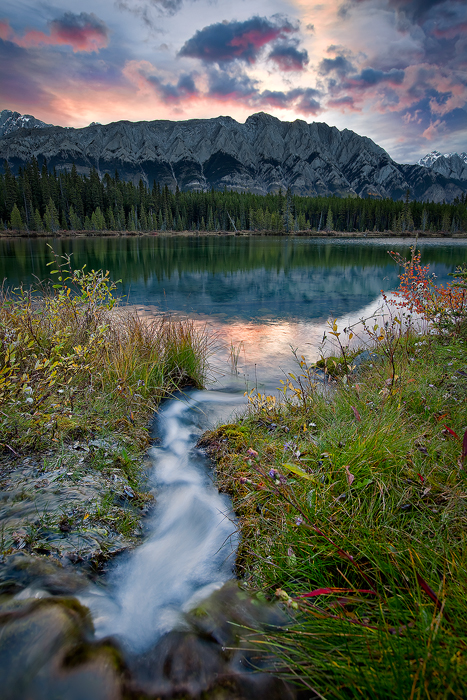