In a recent post on the Luke Austin Photography facebook page I asked for peoples input as to which image I would post next. I requested that they state specific dates within a two year period. My challenge was to take the first responded date and find an image I had shot from that day.

I realised I had not yet posted the image to the blog. So here it is.. August 30 2010… Alaska, Incredible place.

Expansive Salt Flat in the South of Western Australia.

40 second exposure to create the movement in the clouds

A dead calm Lake Quinalt blanketed in the morning fog.

Below is an image I captured while in Alaska in August/September of 2010. I was surprised to find these Lupins on the mountainside on the hike up to the Harding Icefield. All the wildflowers at a lower elevation were well past their best before date but as I slowly climbed higher the foliage and wildflowers were in far better shape. I decided I would continue on and upward and shoot the Lupin on the way back down later in the afternoon.

Once I returned to the area I had briefly scouted on my way up it began raining, only for a short period however. There was just enough rain to line all the leaves with tiny beads of water (clearly visible in print) and make the mountainside wet enough to cause me to slip n slide all over the place. Trying to hunt out a composition that I felt worked in the slippery conditions was frustrating and after one bad spill it became painful (a rock in the behind will do that to you. I said ROCK!). Anyway after finding a composition I was happy with I sat, waited and recovered.

Here’s an image above Weano Gorge displaying the variety of contrasting colours after a great wet season. 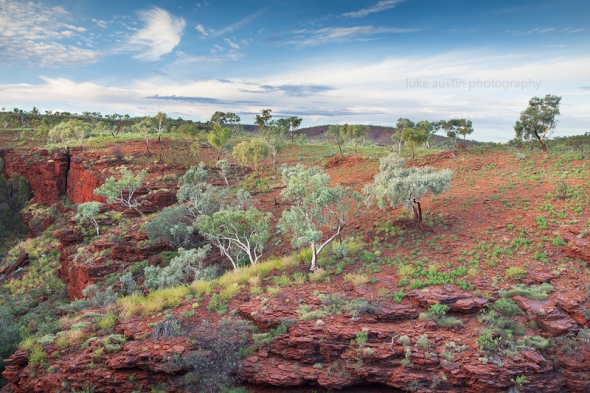 Just skimming through some older images and this one caught my eye. Shot during Fall 2009.

I actually bumped into well known U.K Landscape Photographer David Noton and his wife Wendy on this particular morning as they were shooting the same snow covered Aspen grove.