Delving back into some images from my time in the Canadian Rockies.

The light show on this particular morning was extremely intense. The peaks lit up a and a small rainbow briefly appeared. It was a mad rush to get to this nearby location and find a composition I was pleased with before the show was over! 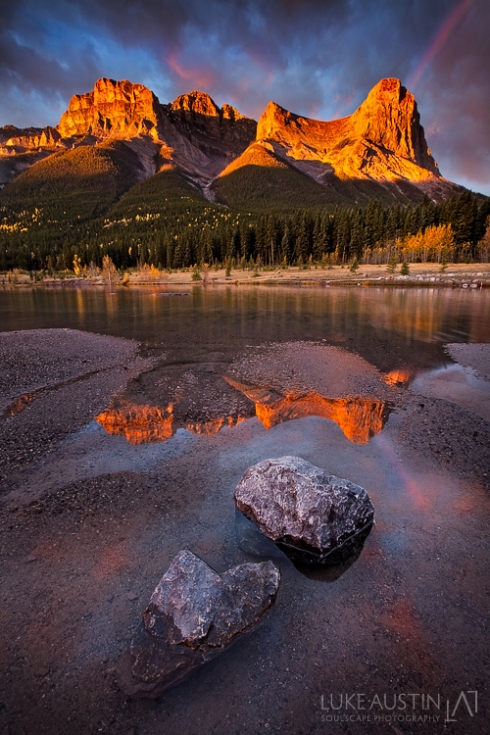 During my time in the Canadian Rockies of Alberta Canada I visited Moraine Lake on a number of occasions. I continually went back there not only to capture it under varying conditions but simply because the place is AMAZING. Each and every time I made it up there I would sit and stare in awe. It is hard not to.

Prior to my latest visit of this location I had captured it under your typical sunny summer conditions and on other occasions completely or partially frozen over but I still wasn’t satisfied. I wanted it snow covered with the lake in its liquid state.

On this particular occasion I was driving back to where I was living in Canmore, Alberta, Canada from Olympic National Park in Washington U.S.A. It was a long day of driving and after just having spent almost 2 months living out of my van/tent on the road I was ready to get home to Canmore. Anyway, I was just one hour from Canmore at 10:30pm when it started to snow pretty heavily, enough so that I was convinced it was going to stick (It was fall so the temperatures had just began to take a dive becoming cold enough for snow to not melt as soon as it landed). I thought to myself, this may be the last and only opportunity  I get to shoot Moraine Lake and the Valley of the Ten Peaks blanketed in snow. I figured it was too good of an opportunity to pass up and spent the night in the van hoping the conditions cleared in the morning.

I’m happy I decided to stick it out for one last night. What a magic morning. 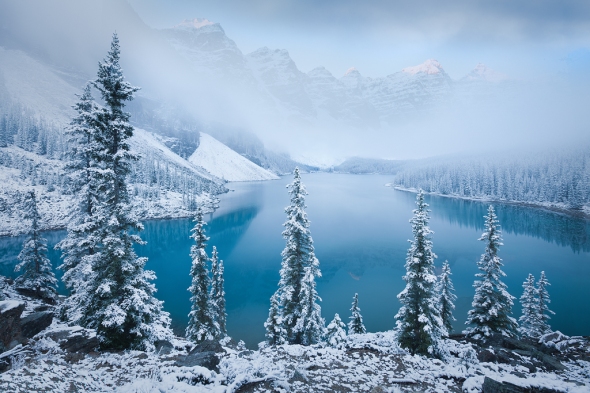 I headed out with the intention of capturing the full moon on Friday night just gone. I scouted this location the evening before to see where the moon would rise and possible compositions I could go with. It was then just a matter of sitting and waiting, hoping that the clouds would cooperate. 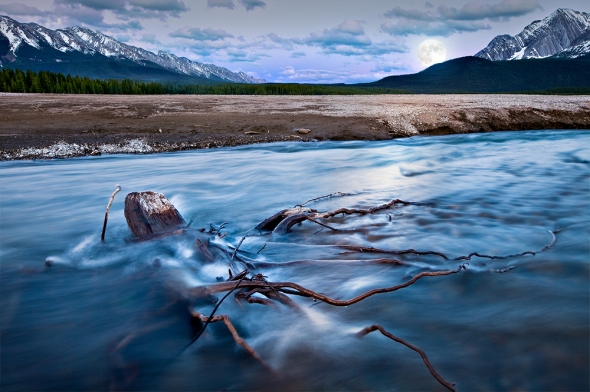 Mono Lake is situated within the Bodie Hills, on the eastern side of the Sierra Mountains.  I really enjoyed shooting this area. It has a lot to offer and I would loved to have spent more time here. This image was shot just before proceeding to the shoreline of the lake and shooting the Tufas (calcium carbonate limestone towers).

I was eager to take my new 70-200mm f2.8 VRII lens out for a test drive this morning so I headed to an area where I regularly see Moose, however on my way there I noticed the sky slowly starting to turn pink on the horizon. I knew that where I was heading was not really ideal for capturing a sunrise shot so I made a quick decision to head to Vermillion Lakes, where I knew I could get something. Unfortunately I arrived just as the initial light show had died down, but I was fairly confident that it would have a second wind, so I decided to set-up anyway. By the time I had hunted down the shot I was after the sky began to light up again. I didn’t get to take the 70-200mm for a spin but came away with a half decent shot of Mt Rundle from Vermillion Lakes. 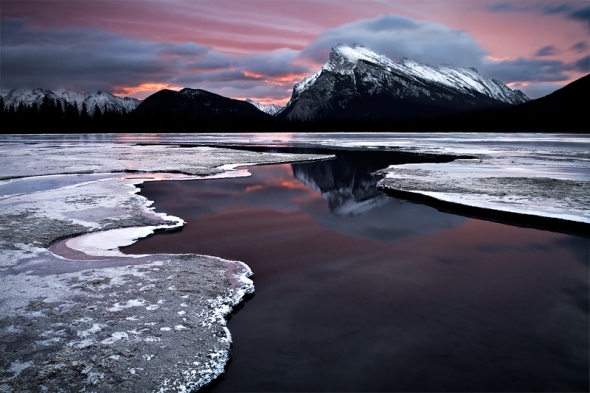